Yesterday it started with a single picture.  Just one I snapped on my phone of my weddings rings and asked my friends to post theirs too using hashtag: Wedding Ring Wednesday so that I could see them too. 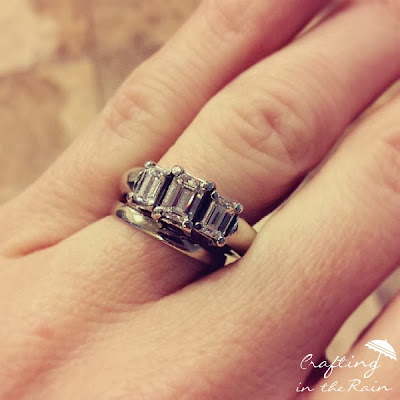 My story is like this: We met in a college history class.  We were friends for a couple of months before he asked me out.

We dated for a few months before I admitted we were dating. I finally realized that I didn’t want him leaving to California without me.  The ring was one I’d seen in an ad and instantly fell in love with it. He had to wait til he knew I’d say yes before he could buy it because it had to be specially made and they wouldn’t let him return it 🙂  We’ve been married 11 years now, and have 3 kids.  I sure got lucky in finding him.

I never imagined I’d then spend the day reading through hundreds of captions (over 600 were posted) about short engagements, long engagements, surprise engagements, and special meanings of rings.

People shared how long they’ve been married, how many places they’ve lived, and how many kids they have.  It was so cool!  I even saw stories from as far away as Australia.

I thought it would be fun to post a few of them here too.

I dare you to read these and not feel happier 🙂 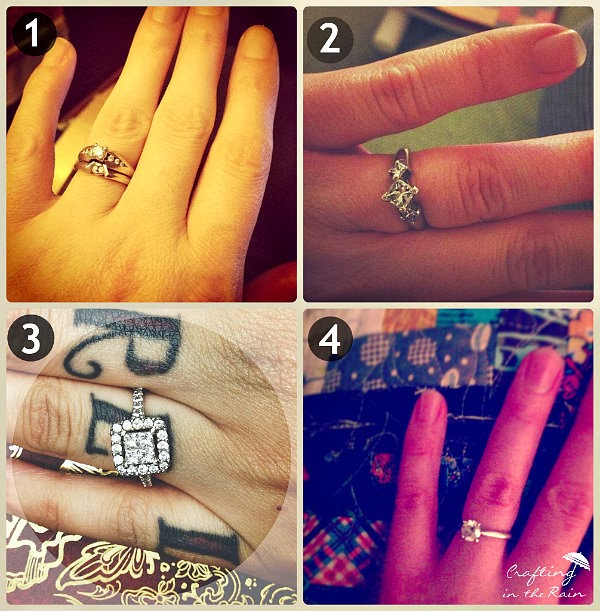 So many pretties! Married to my best friend for 7 years, but we’ve been together for more than half our lives! Started dating at 14 and have been inseparable since! The best part about my ring is that he picked it on his own. He obviously knows me well, I adore it.

Normally I’m such a cynic that public displays of affection on social media make me cringe. But I just read like 35 of these stories and my heart grew 3 sizes. Nick and I met when we were 15. We’ve been together since senior year. He surprised me with this perfect ring he designed all by himself and a proposal in the Great Smoky Mountains and next month will be 8 years. Marriage is cool you guys.

#weddingringwednesday seen a lot if ladies doing this so I thought I would give it a shot. I was with my husband for about 3 months before we got married. We got married 6/26/10. Almost coming up on 4 years of marriage and still love my hubby more then ever.  him and our son are the best thing iv ever done and the hardest but I wouldn’t change anything. Love our little family. @xahhx I don’t have a wedding band but maybe someday. Wentt hrough the tag and so many ladies have so many beautiful rings!

Okay I can’t believe I’m doing this but all of your stories have turned me to mush #weddingringwednesday It was love at first sight for me when I first met Mark. But alas, I had a boyfriend (I didn’t like very much) and he had a girlfriend. Months later we met again, both single. I was with a girlfriend (gorgeous, model) at a winery and he was there. Our car was broken into and my purse,phone, keys were all stolen. He took care of us and the whole debacle. I was convinced he liked my friend. The next day I got a new phone and my first message was from him asking if I could meet him after my classes that night. We’ve been together ever since #weddingringwednesday Play along! Hubby and I met at Uni in ’86 – purchased our first home when we finished our courses. Interest rates were 18% and all our money went to paying off the loan. By choice my engagement/wedding rings were budget style. 16 years later I was surprised with a sparkly ring promised those years ago. I wouldn’t change a thing.

#WeddingRingWednesday We were flying from Sacramento to Seattle for Christmas. I was bringing my boyfriend home for the holidays & that was MAJOR. He was acting SUPER weird that day but I figured he was just a nervous flyer (it was our first time flying together). We were in the very first row facing the rest of the plane & at 30,000 feet my name went over the loud speaker..is there a Sarah Nicole Garza on the plane?!? The flight attendant handed him the loudspeaker he professed his love, got on his knee and I said YES!! It was sssooo perfect, so fun and beyond unexpected!!! FunFact: I almost lost my ring finger TWICE. 1st time with an industrial meat slicer, 2nd time a random fluke that ended with me having to get my ring cut off.  That’s my story!! WHAT IS YOURS?!?

Known and loved him for 9 yrs married for 7. I was fortunate to get him after he was established. I love my ring but would have married him with a twist tie on my finger.

My wedding ring. It has barely left my finger. I ALWAYS wear it. And even though it shows some wear, has a few scratches and a few dings and nicks, I’m grateful for the ten years it proudly shows. I wouldn’t change it for anything. 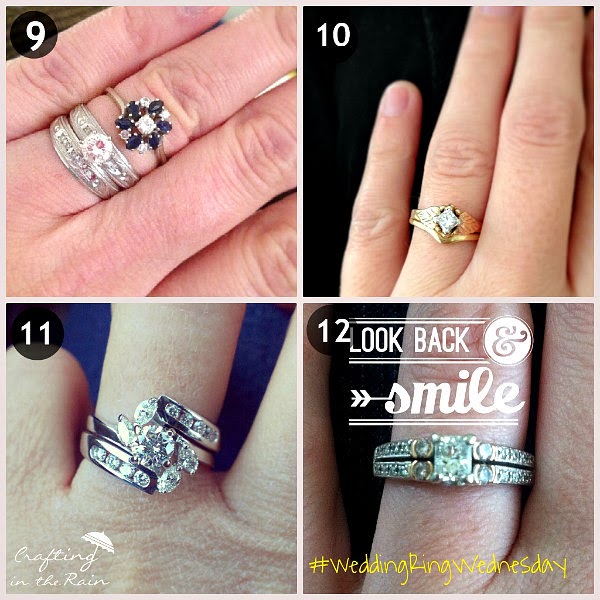 #weddingringwednesday for @familyeverafter. My husband and I met in a bar, went on our first date two weeks later and were engaged a month after that. He went looking for a ring on his own but had no idea what he was doing and requested I help him out! We found the sapphire/diamond cocktail ring at a pawn shop for cheap and I couldn’t stop thinking about it while he mustered up the nerve to talk to my dad. When he went back for it they had closed for Memorial Day weekend, or so he claimed! He surprised me with it on the couch later that night. The official wedding set was insisted upon by his mother, haha! It’s an antique setting from an estate sale. I wear the first ring on my right hand now, we’ll be married six months on the 25th and it’s still a fairy tale 😀

I’m laying on the couch not feeling good at the moment, so I thought it’d be fun to join @steph_crafting_rain and play #WeddingRingWednesday. Troy and I have been married almost 10 years! He bought my ring in the Black Hills of South Dakota, where we both grew up. Hence, my ring is Black Hills Gold (the green and pink leaves). The diamond is a “princess on point,” representing all my years spent dancing. I love all the meaning behind my ring, and the greatest thing it represents is eternal love! (We think someday, maybe our 15th or 20th anniversary we’ll find a ring with white gold since it’d be nice to have rings in both colors to match other jewelry, haha, but for now I couldn’t be happier). Ok, YOUR TURN! What’s the story behind your ring?

So excited to have my ring back!! It looks brand new

Playing #weddingringwednesday Chris and I have been married 8.5 years. We’ve lived in 9 houses together. We have 3 sons. And I thank Heavenly Father everyday for the life I have with Chris. We went “looking” at rings one day while waiting for the Air Force recruiter. This is the one I picked. Princess cut diamond with 4 pink diamonds, set in rose gold, with smaller diamonds on the sides. There’s hearts on both sizes of the diamond, in white gold. I’ve only ‘lost’ it once, with the help of Connor moving them while I was in the shower one day, years ago. I would like a diamond band to wear under it, one day but not now. I have better things to buy like fabric and cross stitching. Besides we have all time and eternity to figure that out. 🙂 Tell me about your ring!

There’s just something special about seeing real-life love stories.  These weren’t Hollywood made, these are real people who have worked hard in life, and work for their love. They have gone through joy, loss and trials, but they have each other.  And that’s even more amazing than a piece of jewelry.

I hope you enjoyed these as much as I did, and that you’ll join me next Wednesday on Instagram for even more of these.  Let’s keep it going!