This is a sponsored conversation written by me on behalf of Cricut. The opinions and text are all mine.

Have you tried out any of the new Cricut tools yet? In July 2019, Cricut released four new tools compatible with the Cricut Maker. I’m showing how to make an engraved metal tag and a Cricut Perforation Blade card. (some links affiliate) 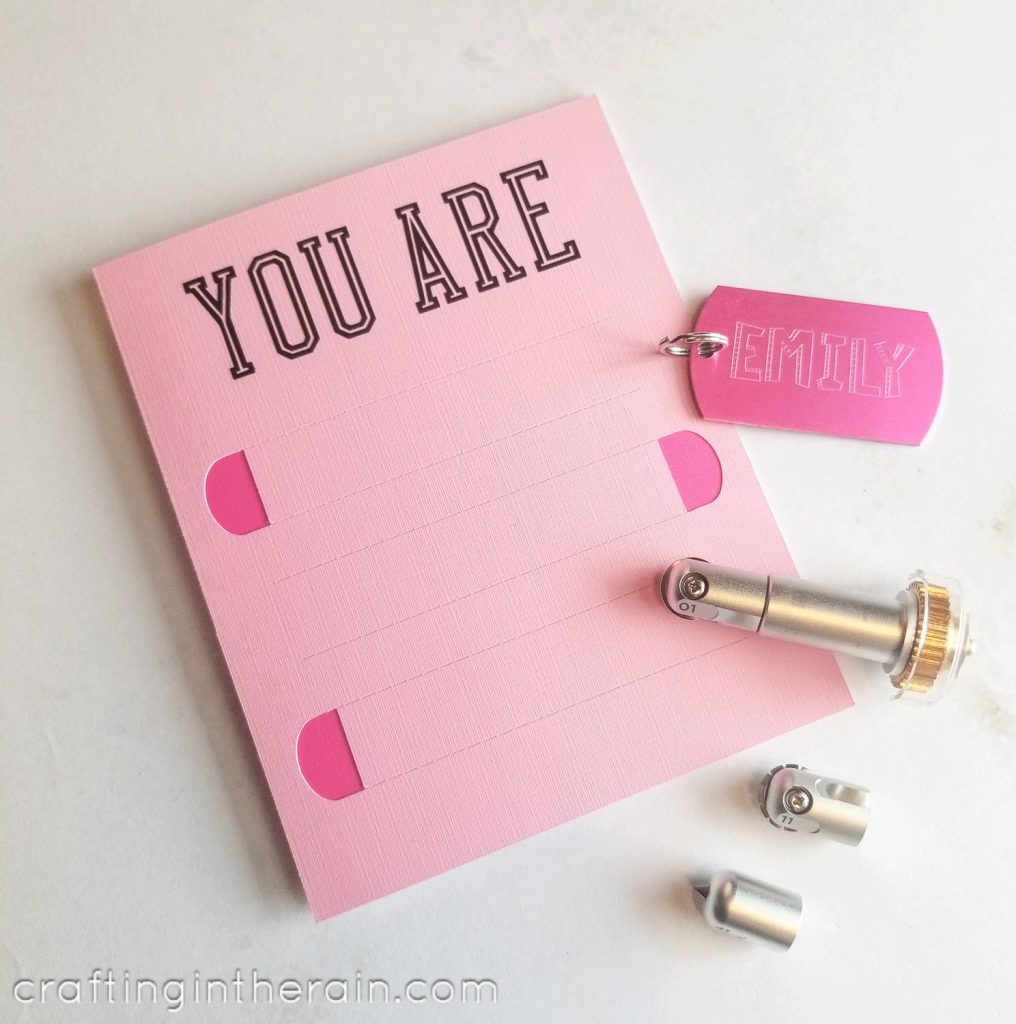 Read here to compare the Cricut Maker and Cricut Explore

How to use new Cricut tools

When the Maker was released 2 years ago, one of the most exciting things was the Adaptive Tool System. Using the new force capability of up to 4g of pressure, and the precise gear steering, the machine would be able to do more than any other machine like it. You can read these posts about the Cricut Knife Blade and the Cricut Rotary Blade and Cricut Scoring Wheel.

The new tools are the Wavy Blade, Perforation Blade, Engraving Tip and Debossing Tip. All the new tools fit into the same housing as the Scoring Wheel (known as the QuickSwap Toolset.)  So if you have one of those already, you only need to buy the tool tips. You can also buy a tip and housing combo if you need one. 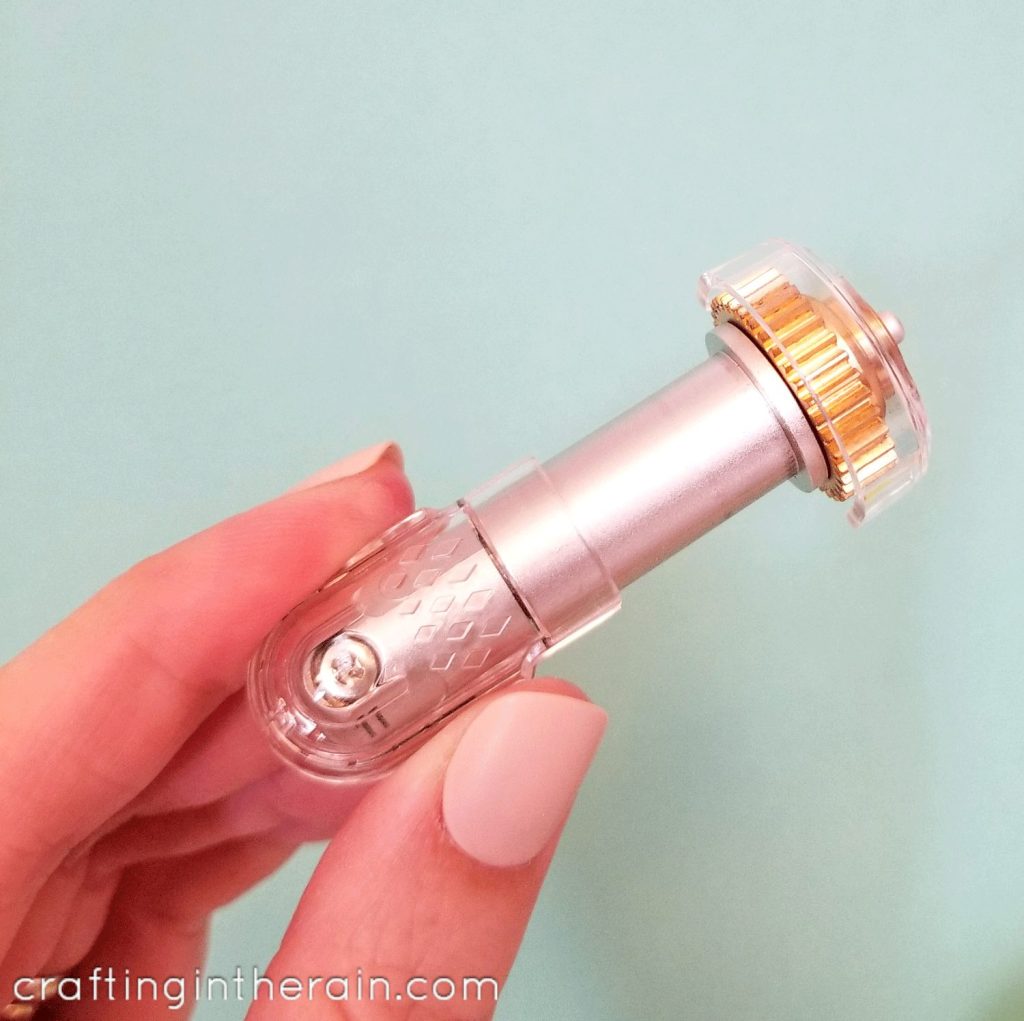 Simply press down on the button at the top of the gear to release the current tool and place on a new one. Once the button is no longer pressed, the tool locks into place.

The Engraving Tip works great on aluminum, including 3 different sizes of Cricut Aluminum Sheets. I used the Engraving Tip to etch a name into this anodized aluminum dog tag. The font is called “DJ Jer.” In Design Space, I sized the name to fit on the dog tag and changed the cut line to Engrave. 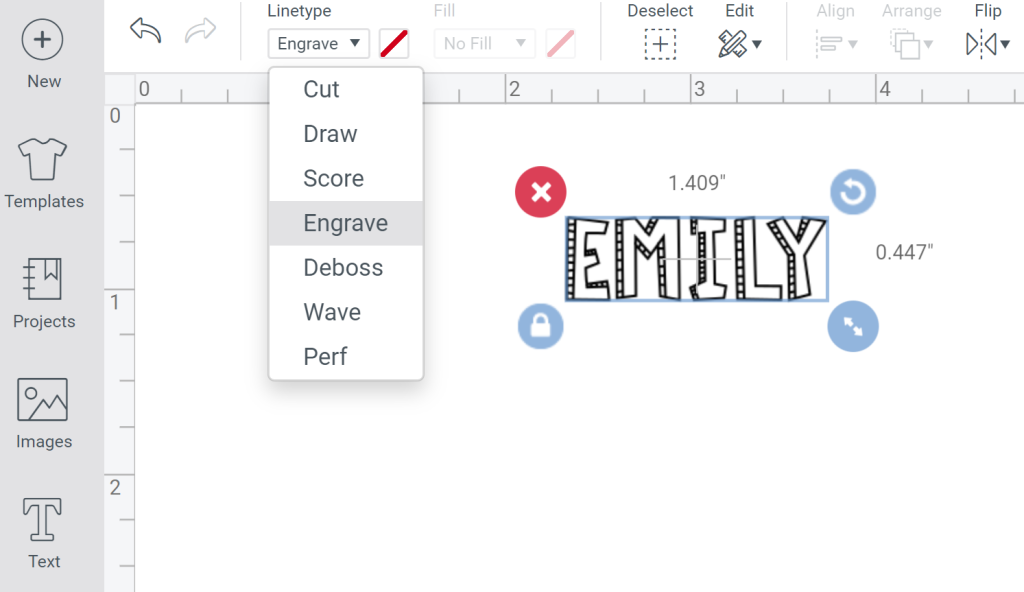 To make sure the engraving was centered on the tag, I taped the tag down right between the 3 and 4 inch mark on my mat. Then after I sent the project to cut, I moved the name to the same spot on the mat preview and continued with the cut. 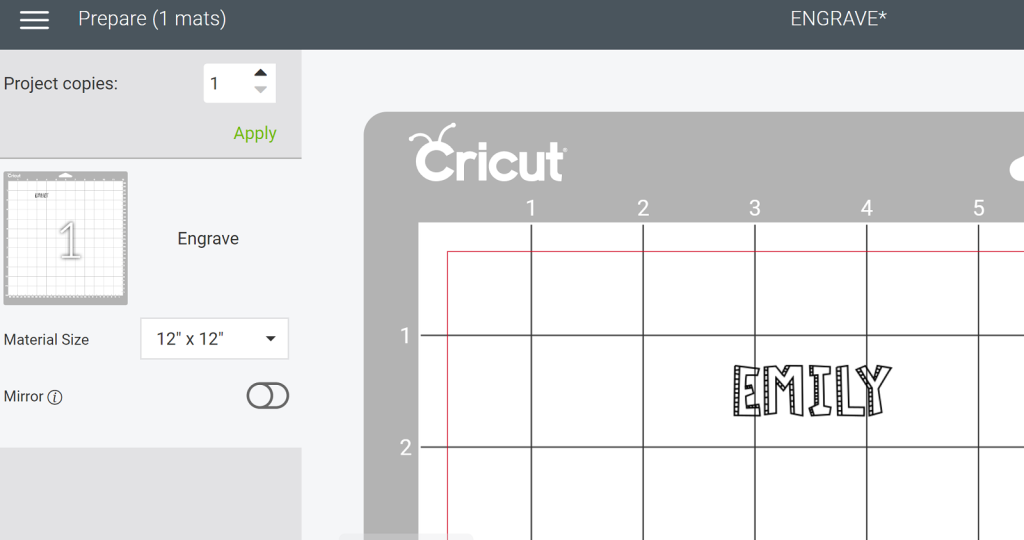 For material setting, I used Metal – 40 gauge thin copper. Load the mat, push cut, and let the Cricut Maker do its magic. Periodically during the cut, the Engrave Tip will lift up and spin, then continue engraving. This is normal, so don’t worry about it. 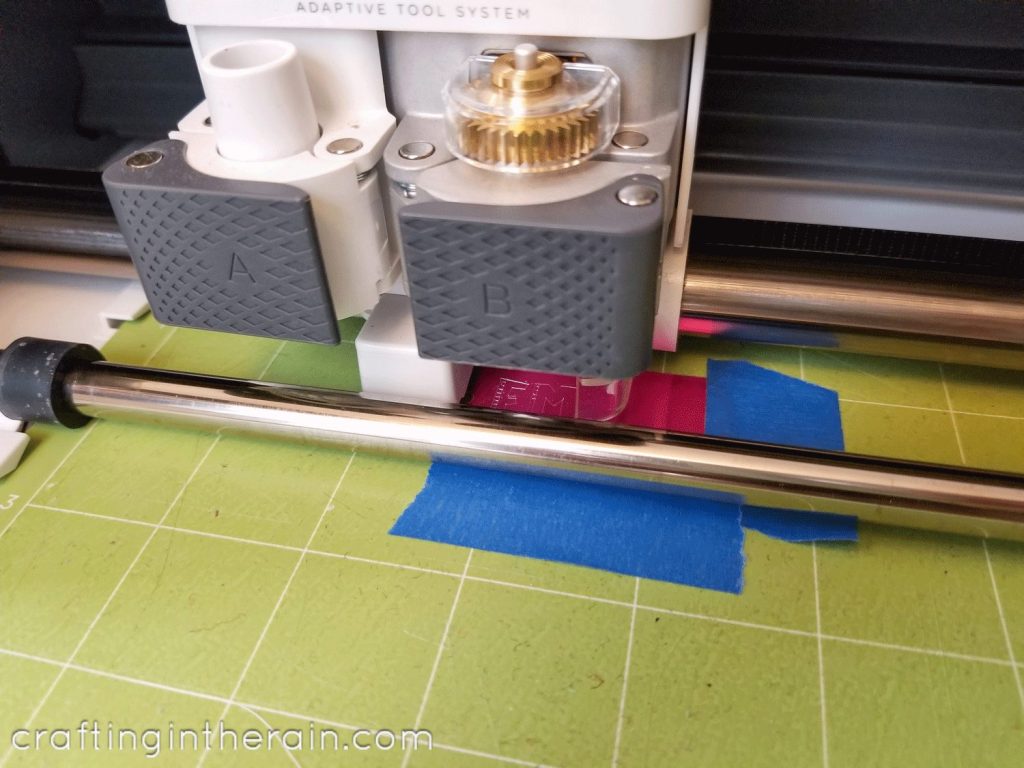 Remove the tiny, possibly sharp, shavings on top of the engraving with a piece of painters tape. Then remove the item from the mat. 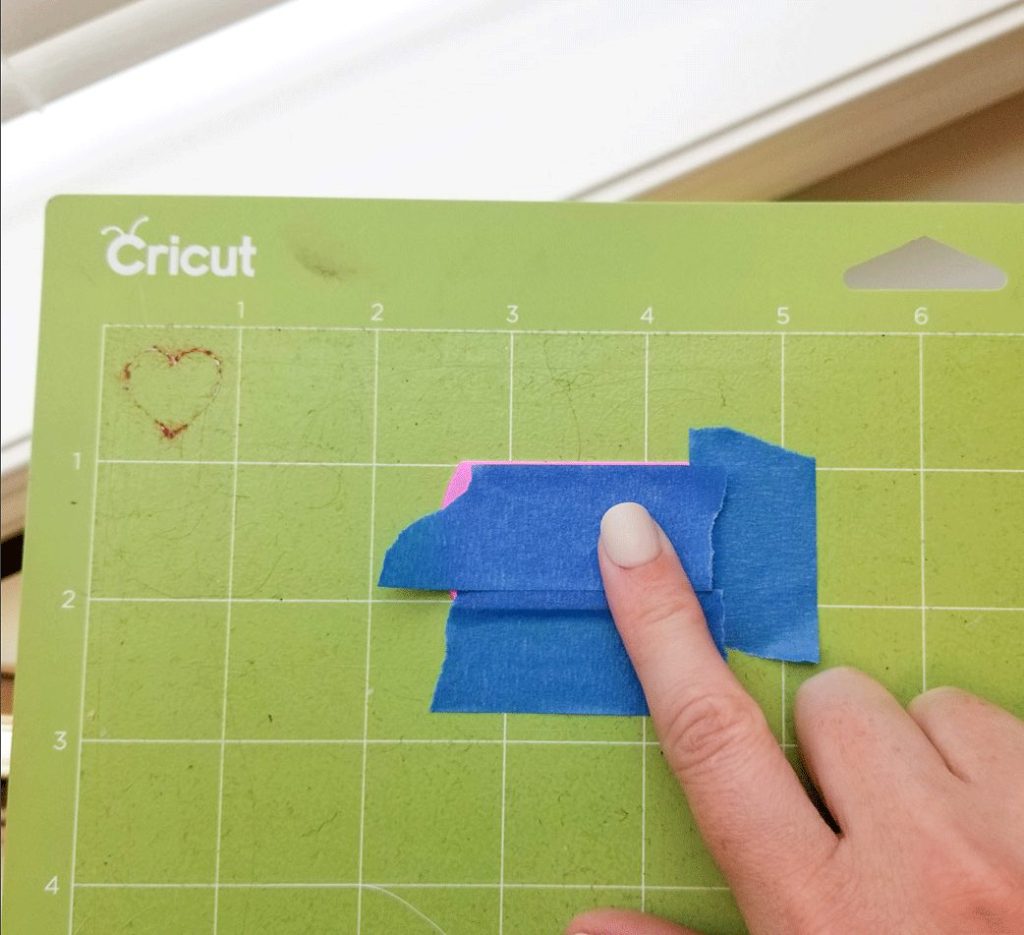 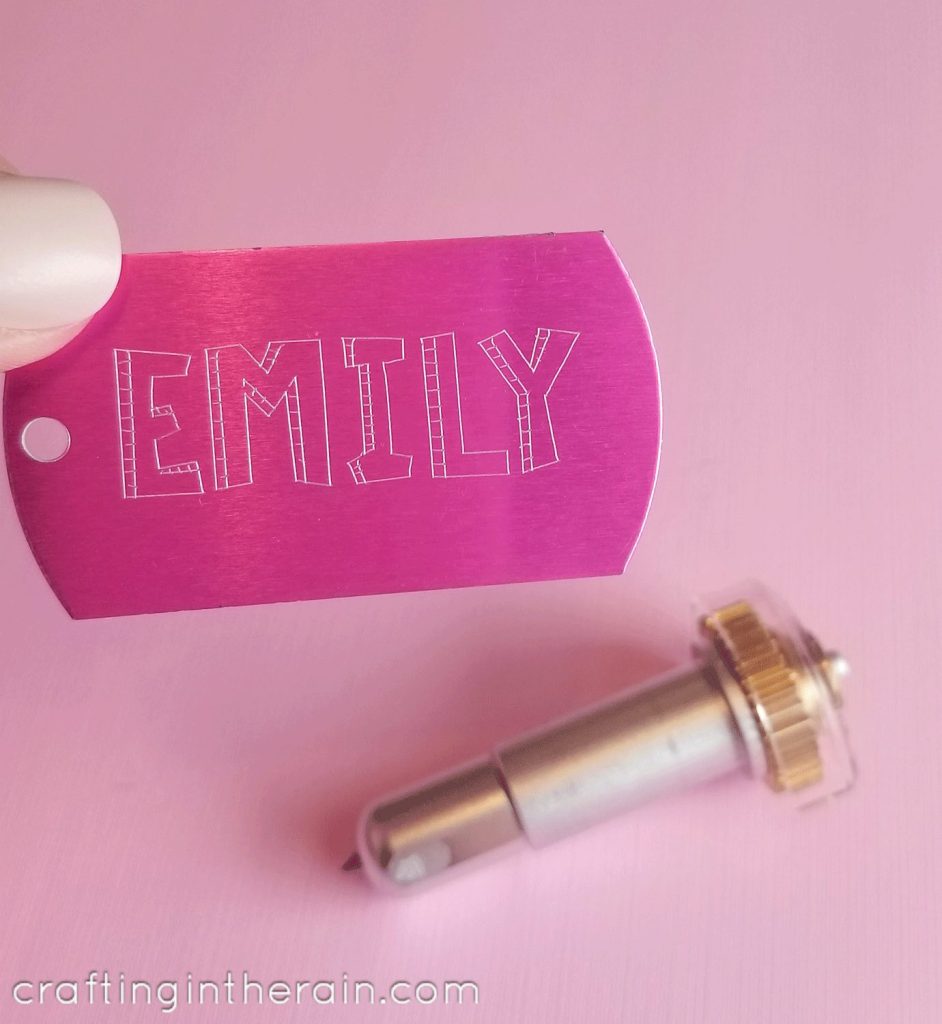 I put a little split ring on the dog tag, so it can now go on a keychain, or end of a zipper.

Next up, I’m using the Perforation Blade to make a pull tab card. Open this Design Space project to create or edit this same card.  The Perforation Blade creates perfectly spaced cut lines that tear easily without bending first. Use it for tear-out pages, ticket books, and peel away messages like this one. 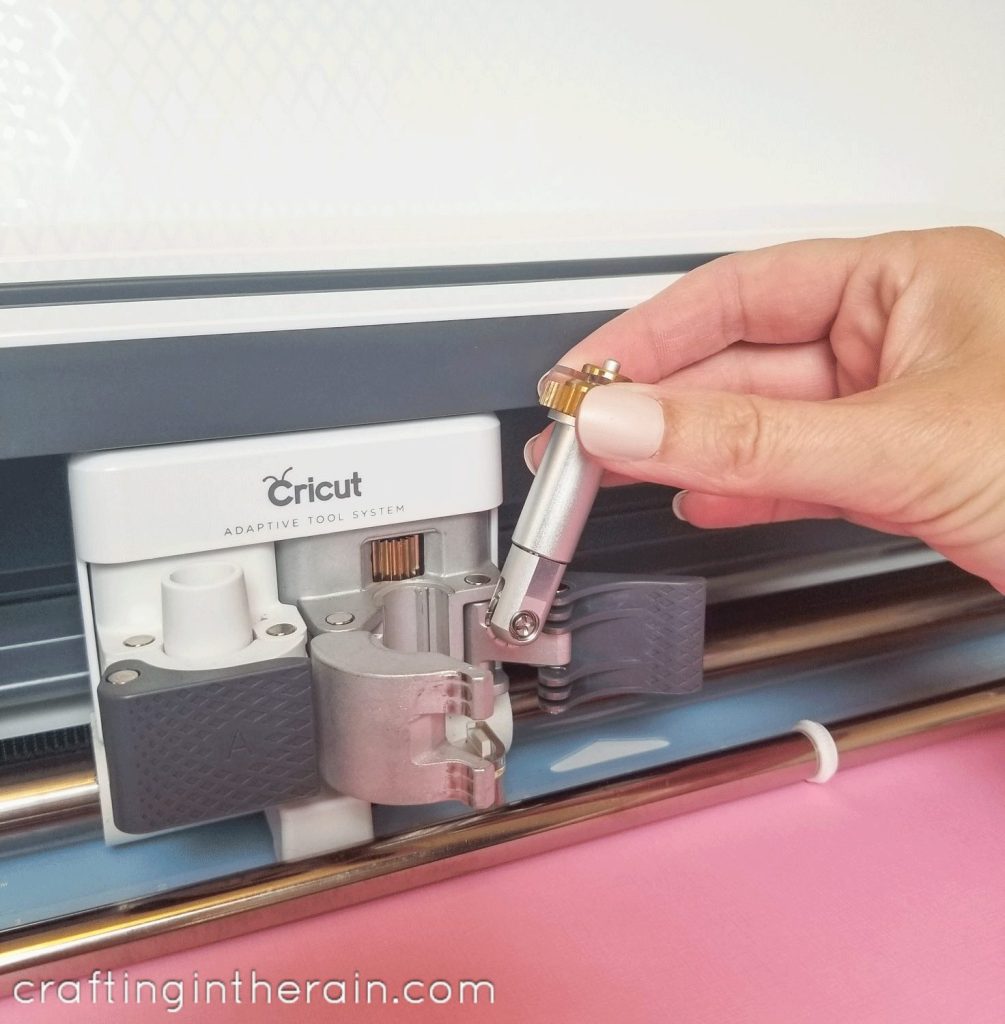 You’ll notice that the card project has a few parts. 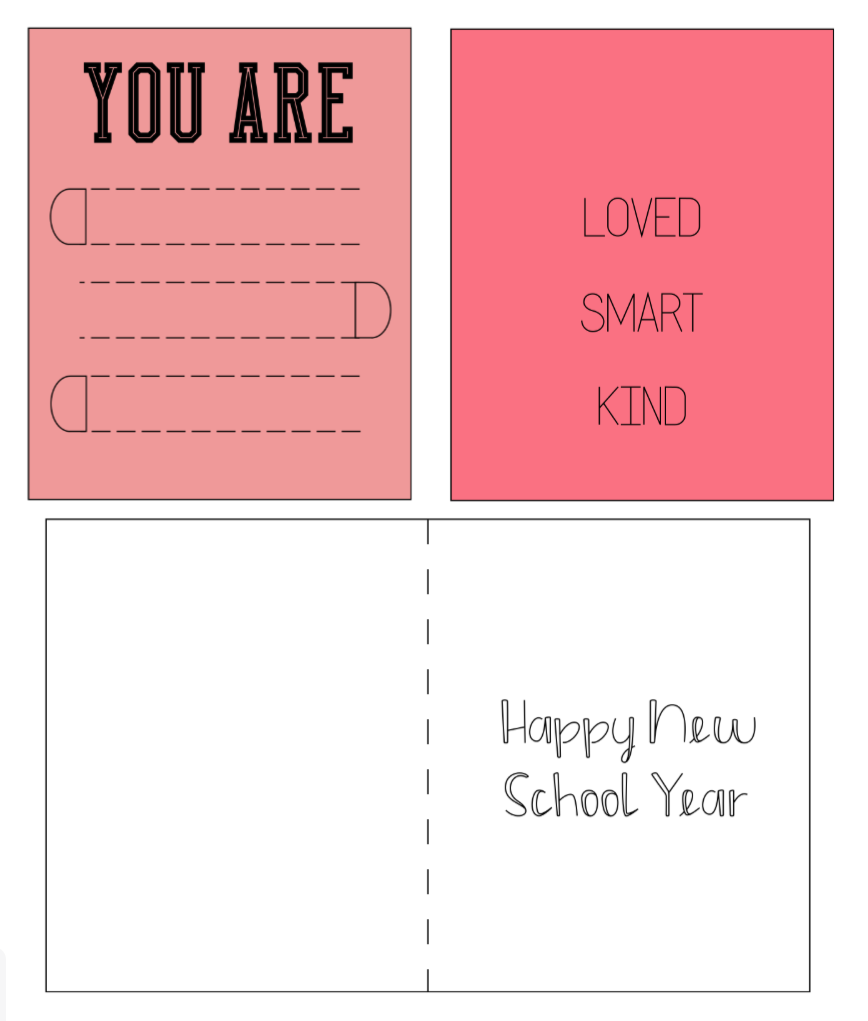 The text in the project has been fixed for letter spacing, so it’s not directly editable. But, if you want to change any of the words, you can type your own and attach them to the same places where they are located now. It’s especially important that the words on the second layer line up with the perforated strips on the top layer so that you can read them when the strips are opened.

Additionally, there is a hidden layer in the project that will cut out small white tabs that you could glue just inside the cut end of the strips to aid in pulling them back later. Choose whichever design you prefer.

Cut all the layers, following prompts for the Scoring Wheel, Perforation Blade, Fine Tip Blade, and Cricut Pen (I used a Cricut Calligraphy pen, which created a thicker line while drawing.) 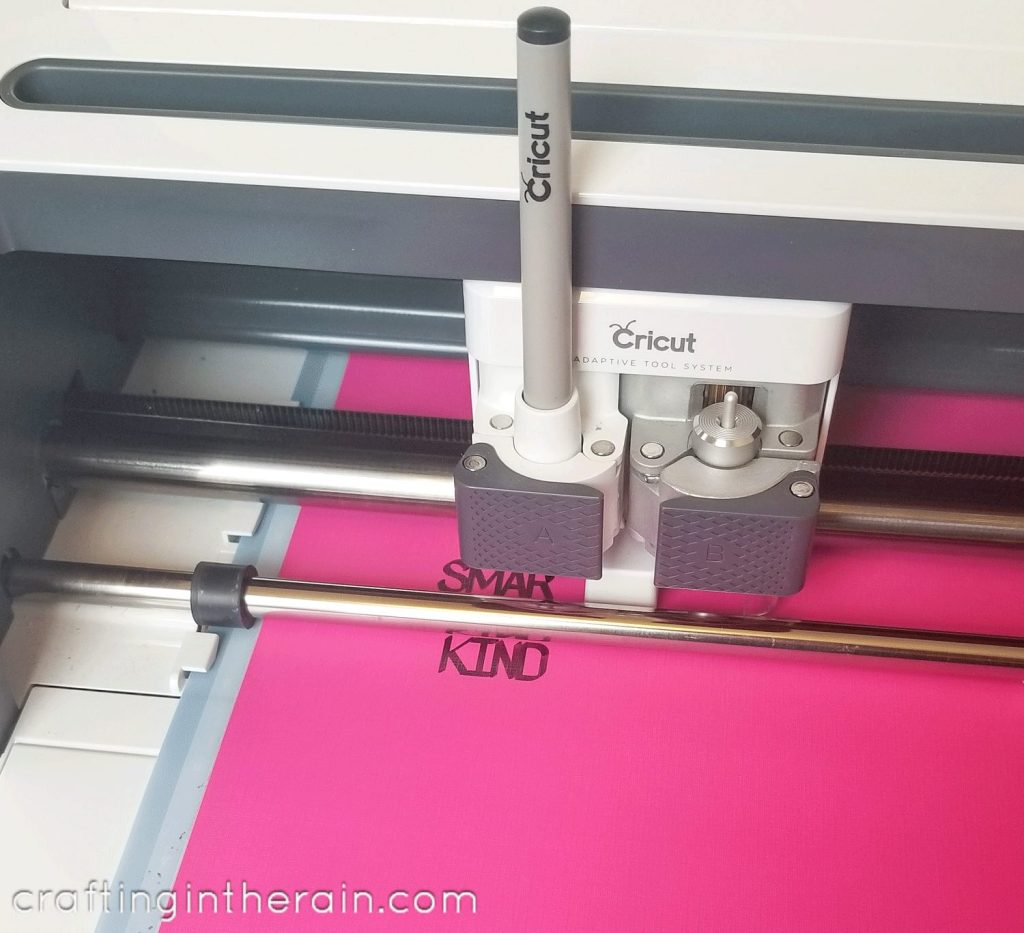 Add the vinyl to the top part of the top layer. 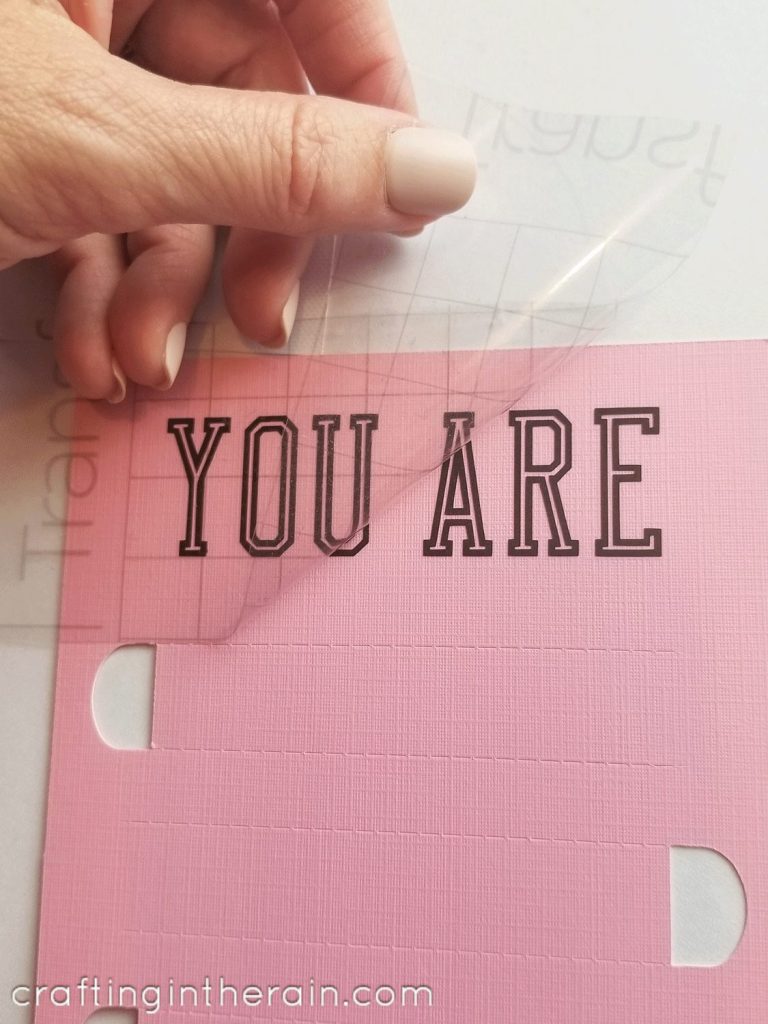 On the back side of the top layer, use a tape runner to apply adhesive – but NOT on the strips that will be pulled away. 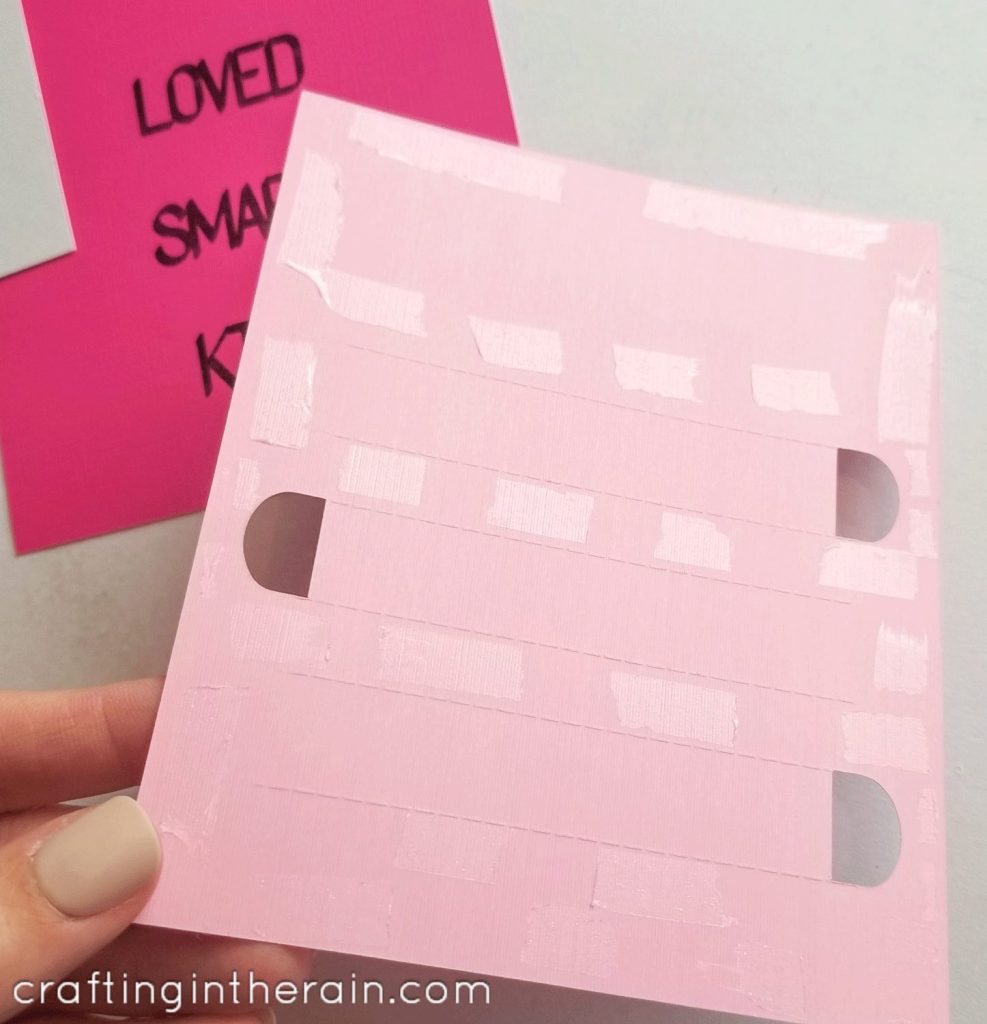 Press down onto the second layer and glue to the card base front. 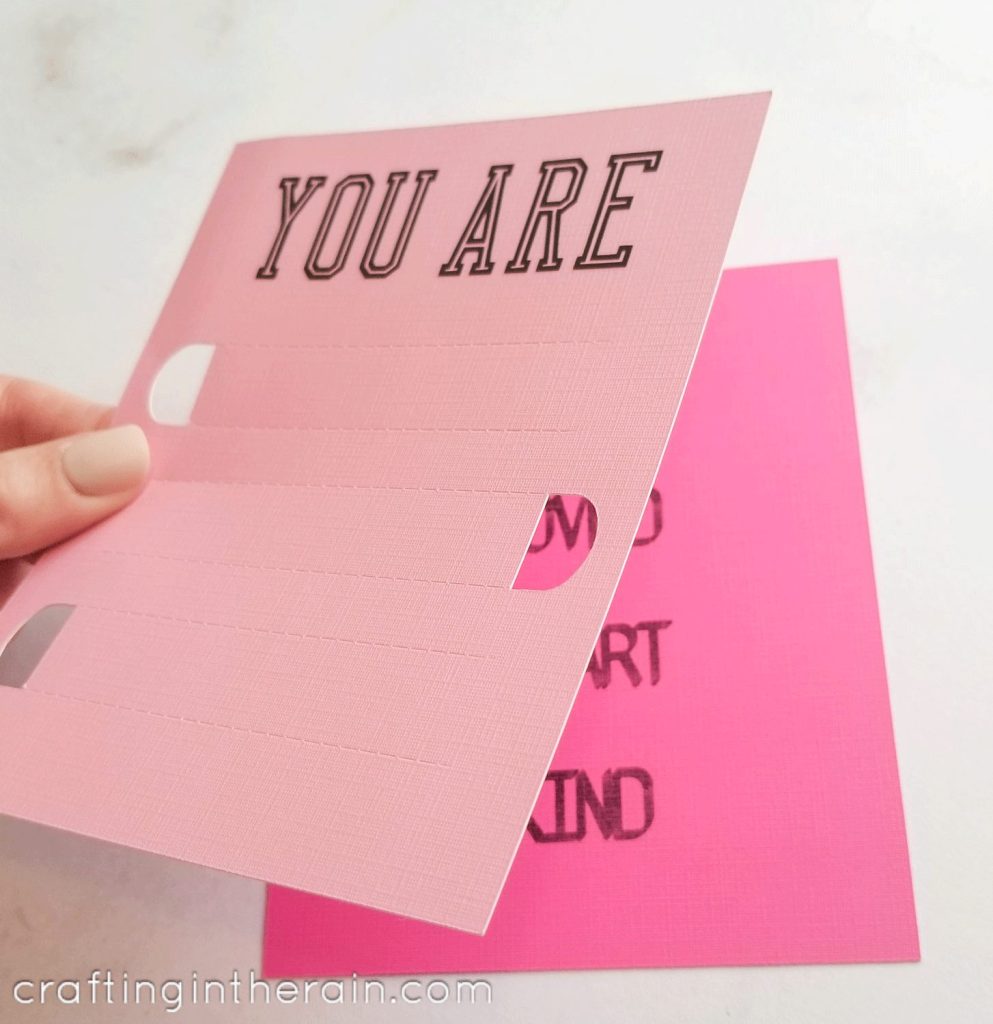 The card is now complete, and the recipient can peel back each perforated strip to reveal the card’s message. 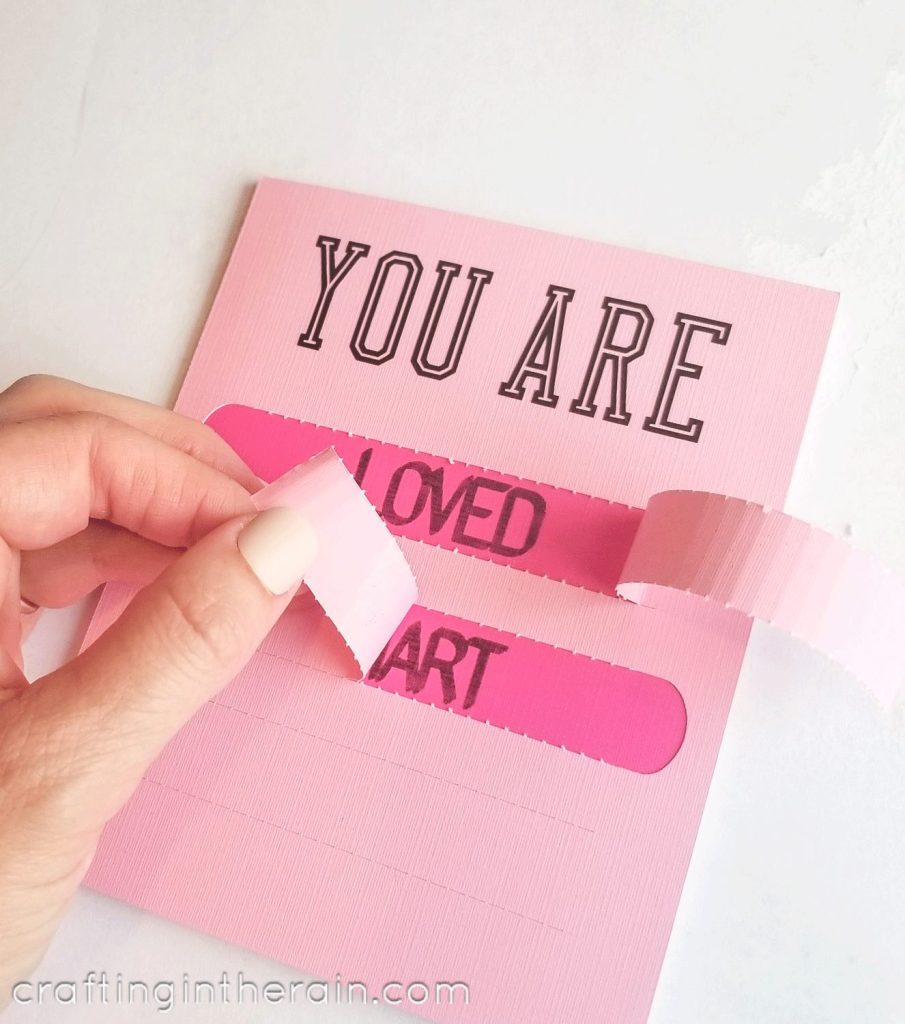 Do you have any questions about using the Engrave Tip or the Perforation Blade? If you’ve used them already, I’d love to hear what you made! 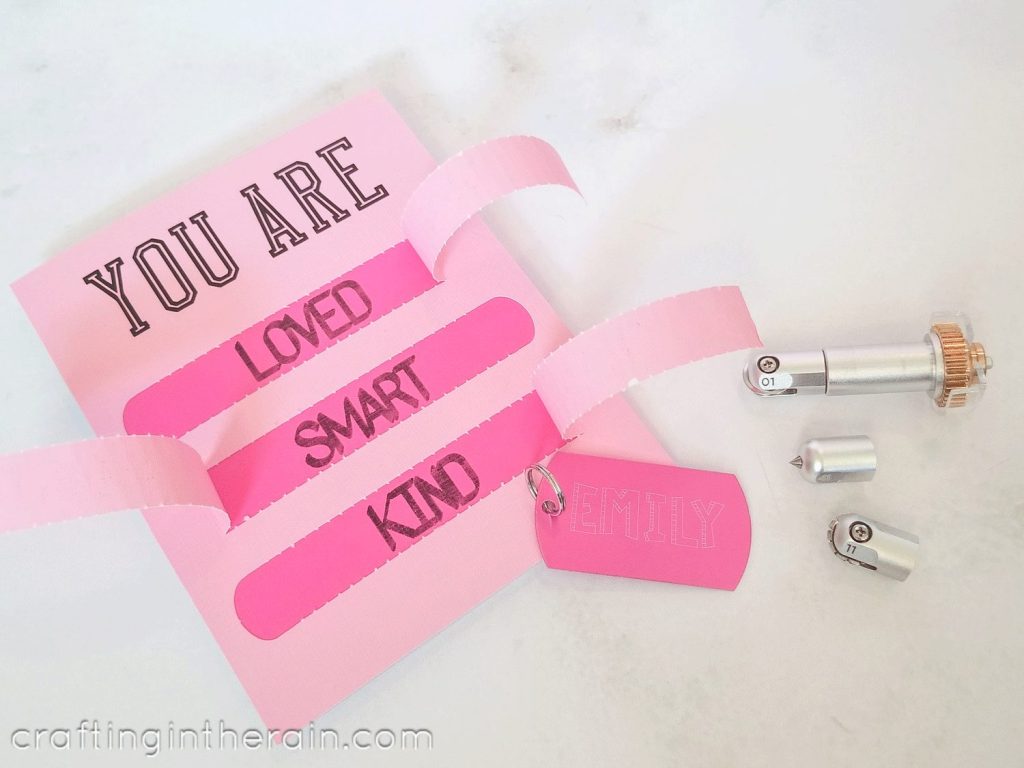 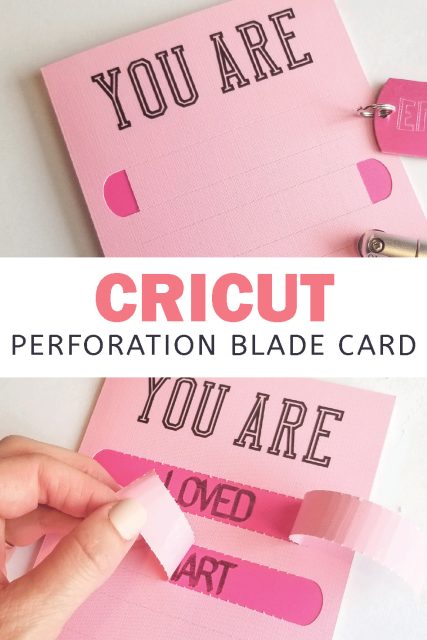