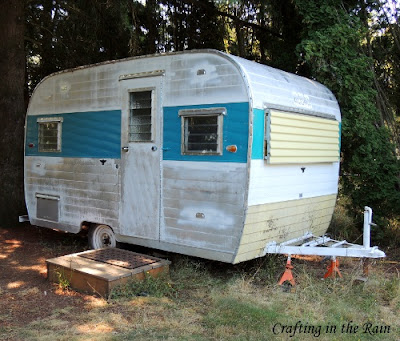 My husband works about 3 days a week from home instead of going to the office.  It saves time and money from commuting, plus income tax from not working in Oregon on those days.  It’s great!

But he used to have just one small corner of our bedroom set up as his office.  It meant trying to keep Asher out of there all day, having to check if he was on the phone before I could go put laundry away, stuff like that was a little annoying to each of us.

Then he got this crazy idea to buy a camper to set up in the backyard and work from there–and it’s ended up being the best idea!

You should probably know that our backyard is kind of foresty-and not really manicured, so it was no big deal to set it up out there (and certainly no HOA around here that would care)  And he gets to watch the goats all day.

Here’s a before picture of the inside.  (We had already taken the drawers out–remember one got used in my porch makeover as a planter) 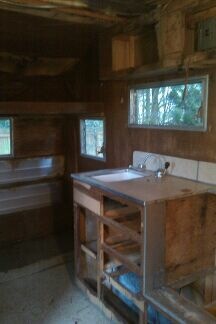 and here’s how it looks after our handyman did some magic in there (we did do the painting ourselves.)  It got new framing, new insulation, vinyl on the floor, beadboard on the walls, and panelling on the ceiling. 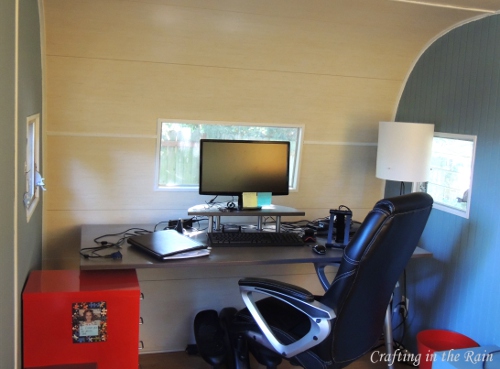 Panoramic view of the inside:

We recently had our electrical panel replaced and in the process had a new outside outlet installed on its own circut. That way if I turn on the hair dryer I won’t trip the breaker that’s powering his computer.

I have to admit, when my husband first proposed the idea I wasn’t really sure if it would work.  We both love the set up though, and with a small heater and portable a/c unit, he’s comfortable through all seasons out there!

So be honest–what do you think?  What would you turn a camper into in your backyard?