It’s true. Last weekend my husband and I went skydiving. If you had told me that I would ever volunteer to fall out of a plane, I would have said you were crazy. But look who’s the crazy one now.
We have a friend who has a 30 by 30 list and skydiving was on it. With that birthday approaching, he found a place that had a group discount so he was trying to get people to go with him and Steve said he would. Then he spent the day convincing me to go too! 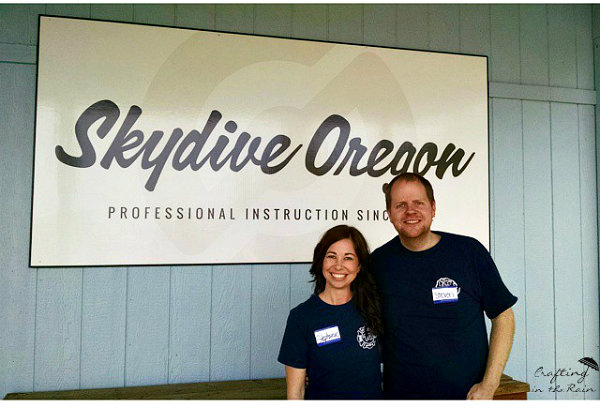 We signed a waiver with a million things on it of course. Then there was a training that explained how we’d sit in the plane, what to do when we were falling, and then how to land.
I was not as scared as I thought I was going to be. When it was finally time for us to go up, I put on a jump suit and helmet–I was pretty stylin. No photographic proof (by this time we had to have all our phones, etc. put away in the car.) The plane was tiny, and we rode up straddling a bench with our tandem guy sitting right behind us. The ride up was super cool because it was so clear and we could see Mt. St. Helens, Mt. Rainier, Mt. Adams and Mt. Hood.

Our instructors secured each of the 4 large clips that would keep us attached and the roll up glass door opened. Getting out of the plane happened so fast! When it was my turn we scooted to the edge with both of our legs dangling out the side and then we just kind of “fell” sideways and out. There was a falling sensation, but it wasn’t the same as just stepping off a huge height, or the stomach drop of a roller coaster (because we were already traveling so fast in the airplane.)

The free fall wasn’t scary–the ground is so far you don’t feel it coming towards you. But it was SO hard to breathe! (Think sticking your head out a car window times 100.) The tricks they told us of exhaling or screaming only helped a little.

But after about 45 -60 seconds of freefall the parachute came out. That part was so much fun! The wind was less, the view was awesome, and it felt totally safe. I was able to really look up and take in the view, and man, Oregon is pretty.

Landing was a little scary, because I knew that was the part where I could actually get hurt! They had us stick our legs out in front of us, and then I just kind of sat down on the ground as we landed. Steve and his guy came in a lot faster and he said he slid on his behind for quite a distance–he had grass all up his shirt.

Then with the air pressure changes, it took several hours for one of my ears to finally pop, so that wasn’t much fun. And our car ride home was a lot quieter—I think all the adrenaline had worn off!  So, I’d say I had fun…it’s fun to say I did it! And I probably won’t try to go again. Any of you who want to do it, you totally should! Find someone to go with you (one other girl went with us–her husband said not in a million years!)

Have any of you been skydiving before? Tell me about it? If you haven’t been, do you want to?
« Layer Glitter Vinyl on a Disney Bag
Denim Canvas for 4th of July »