I saw this post the other day from Attempting Aloha and I thought it was a great idea to include a link back to your blog at the end of posts to make it easier for people to click over if they want to.

I figured it can’t hurt, and it saves you the trouble of having to scroll back up through your reader to find the title of the post you want and click on it.  We’ll see if it’s helpful.  I know I’ll be watching for it on other blogs now!

(Also, what do you think of the wording I used at the bottom?  Does it seem like I’m begging for comments?  Would you rather just see the blog name hyperlinked?)

And now for something completely different!
Have you seen this idea floating around on Pinterest?

It’s a wedding invitation that’s been cut into strips and curled up in an ornament to give back to the couple for their first Christmas.  I thought it looked so cute that I had to do the same for my brother and his wife.  Plus, their invitation had such great colors.

It won’t really be a surprise I guess if they see it here first, but it’s not like I came up with the idea either.  Maybe they’ll end up getting several of these and get to decorate their whole first Christmas tree with them!

Anyway, I discovered that shiny ornaments are so hard to photograph when you don’t know what you’re doing (and I don’t) but here are a couple of the decent shots I got. 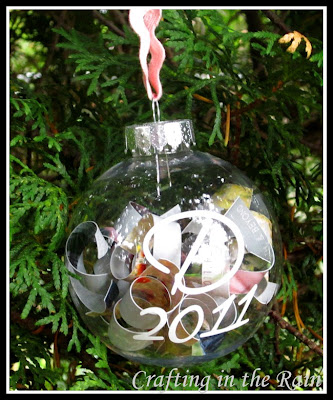 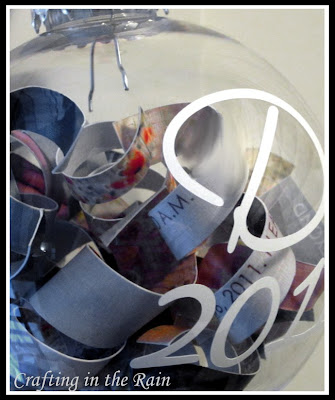 Plus I added their initial and the year in vinyl.  Hopefully they like it–or 10 of them!

« My First Soap Box
Me and the Blues »