They seem to be drawn to our middle daughter the last couple of days.

Yesterday, one of her shoes fell off at recess and one boy told another boy to throw it over the fence into someone’s back yard.  So he did.  Luckily I was at home so when the office called it was no problem for me to hop in the car and run an extra pair of shoes to her until the missing one could be recovered.  I don’t know exactly how they got it back, but I do know the culprit was there with his mom when Meagan was called back down to the office and he said sorry and gave her shoe back.

Then this morning, when we were already running a little late in getting ready for school of course, she and Asher got trapped in the girls’ bedroom.  Something broke in the doorknob (even though those doors are only a year and a half old) and they couldn’t turn it! The screws for the doorknob are on the inside of the door so I couldn’t even take it off.

Poor Emily was more worried about them than they were.  She even said a prayer that they’d make it out ok.

I went around to the back of the house and talked to Meagan through her window and tried to talk her through opening it, but her fingers just aren’t strong enough to pinch the latch open.

Through the whole mess I was also texting my husband who’s at a work conference in Chicago.  In the end he suggested prying part of the door jamb away and sliding a screwdriver in the to push the latch in.

It worked, only it snapped and this is what the door looks like now.  Nice, right? I then removed the whole doorknob and latch from the door so it can’t happen again. 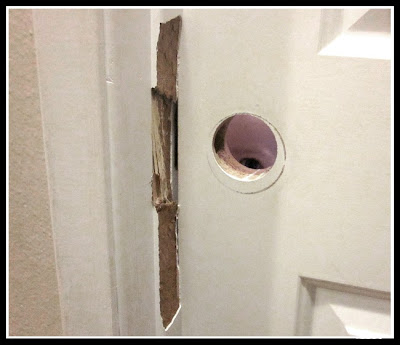 At least the kids got out.  And they weren’t late to school, but I had to drive them since they missed the bus.