I’m going to be honest with you–I wasn’t sure I wanted to publish this post.  Nobody really likes to talk about when they did something dumb.  I’m not talking picking a bad paint color or leaving the salt out of a recipe.  I’m talking really dumb.   Like put people in danger dumb.

I’m going to tell you about an experience I had back when I was 20 and a college student.  I was at BYU, and every year they had people do “Don’t Drive Drowsy” presentations during the week before the Thanksgiving break.  I admit to not paying too much attention.

1–I didn’t even own a car.  I never drove home from
Provo to Idaho Falls.
2–I kind of assumed they just needed something to talk
about, since they weren’t really worried about
students driving intoxicated.

Well, it so happened that that year my brother, a high school senior, and his friend were making a visit to BYU, so they drove down in our family Suburban (oh, yeah) with the three of us planning to drive home together at the start of the break.  It got even better when I decided to just attend one of my Tuesday morning classes and skip the other ones, so we could leave even earlier.

Monday night we stayed up super late at my aunt’s house, probably around 2am.  Then after my class the next day we left town.

You can probably guess where I’m going with this–yep, I fell asleep while driving home.  Just outside of Pocatello, even though we’d stopped at least once, and my brother had even offered to drive some, but I said no, thinking I’d probably had more sleep than he had the night before anyway.

My brother was in the passenger seat and we had some music going.  Suddenly he noticed the car drifting, so he looked over at me and my eyes were closed.  Seriously.  I can’t imagine what he thought in that moment.  But he reached over to grab the wheel and that startled me awake, causing me to jerk the wheel and swerve sharply (I had the Suburban on cruise control to make it worse) and we went right off the side of the road into a ditch, turning the car upside down in the process.  (I thought I had a picture stashed away that I’d taken of the car, but I couldn’t find it…so you get this one of me instead, taken just a few days before on my 20th birthday) 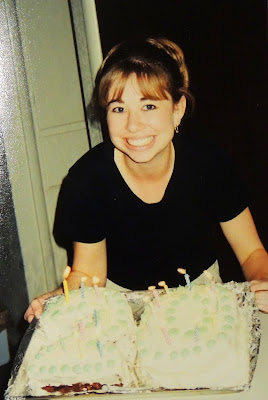 We ended up crawling along the roof of the car and getting out the rear door.  This was way before the days of everyone owning a cell phone, so we were lucky that someone had been driving behind us and was able to call it in.  Also on the list of “luckys” (though I call them miracles)

–We were ok…that picture above could have been the last picture taken of me
–We had not been trapped in the car
–I learned later that my brother’s friend hadn’t even been wearing his seat belt!  From that day on I have made sure that anyone driving with me has a seat belt on–they don’t get to choose
–We went off the road at the place we did.  I’ve made that drive many times since then…sometimes driving, sometimes the passenger, and always cringed a little at the overpasses, bridges and dropoffs where we could have crashed instead
–There weren’t any other cars on the road next to us.  I could have so easily brought other victims into this mess

I made it on the news that night.  There was a small blurb about traveling students who had crashed.  I think I may have even been in the footage a little.  Not my proudest moment, and certainly not what I wanted to ever be on the news for.

When I made it back to school after the vacation, I wrote a letter to the school newspaper which they published (again, not what I wanted to be in the paper for) but I felt like I should tell people what could happen.  Other than that though, I haven’t talked about it much.  It’s embarrassing, and not in a tell-it-anyway-cause-its-funny type of way.

If you read through all this, thank you.  If you know anyone traveling this holiday season, especially college students, please forward this to them, or talk to them about it.  And if you yourself are driving somewhere and start to feel tired at all, please pull off somewhere and rest for a while, or let someone else drive.  So, so, so much better to arrive a little late than not at all.  Also–most accidents like this happen close to home because you’re familiar with the surroundings, and you think you’re so close that you can just push through and make it there.

For more information about driving while sleepy visit
DrowsyDriving.org   TeenDriverSource.org  and these drowsy driving facts.  Be safe on the road!