Even though Halloween is over, I have to show you the shirt I made for Asher.  He told me he wanted to be a road for his costume–and here’s the easy way I did it.

I bought a plain black t shirt and cut strips of glow in the dark Duck Tape to make road lines.  Then I took one of his toy cars and sewed embroidery thread around it to attach it to the shirt.  I even cut out a little stop sign for him with an exacto knife and wrote the letters in black marker.  I had tape going around the back of his shirt too, but then he wore a jacket and you couldn’t see it anyway. 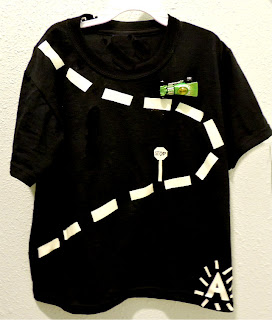 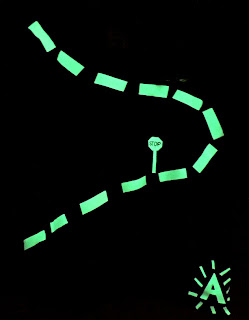 Now that we don’t need the costume any more, I cut the thread, peeled off all the tape, and now he’s got a regular shirt to wear.  Though I am thinking about what I could put on it for his Cars birthday party in a few weeks 🙂